Welcome to the Taube in Bizau.
With its homely and congenial atmosphere, our hotel is the perfect place to spend an enjoyable and relaxing holiday.
Your hosts Margit and Monika Dietrich-Moosbrugger are committed to ensuring their guests' well-being and satisfying their every whim. 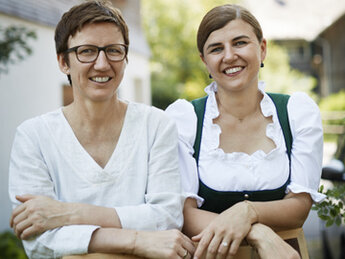 Where hospitality is more than just a word

Village inn and restaurant, meeting place and holiday destination, the Taube in Bizauhas a number of guises. Come and see for yourself, and let us spoil you rotten! Offering fine food and comfortable welcoming accommodation,  our hotel combines high quality and a loving eye for detail with a real understanding of the needs and wishes of our guests.

Your hosts
Margit and Monika Dietrich-Moosbrugger

The Taube's place in the village

The house by the church has been an inn since as far back as 1850. In the year 1929 it was taken over by Hermann and Margaretha Dietrich, the grandparents of the present hosts, and passed on to the next generation. Since 1989 the Taube in Bizau has been run by Margit Dietrich and Monika Moosbrugger.

Each successive generation has left its mark on the house. Representing the "Juppe", or traditional regional costume worn by the women of the Bregenzerwald, the exterior of the inn was faced with spruce cladding, with the red glass sliding doors depicting the bodice.

Further renovations, modifications and state-of-the-art additions have followed, but the traditional relaxed hospitality and the friendly interaction between locals and guests has not been lost. 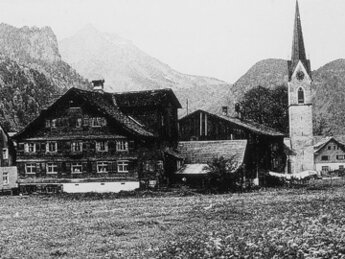